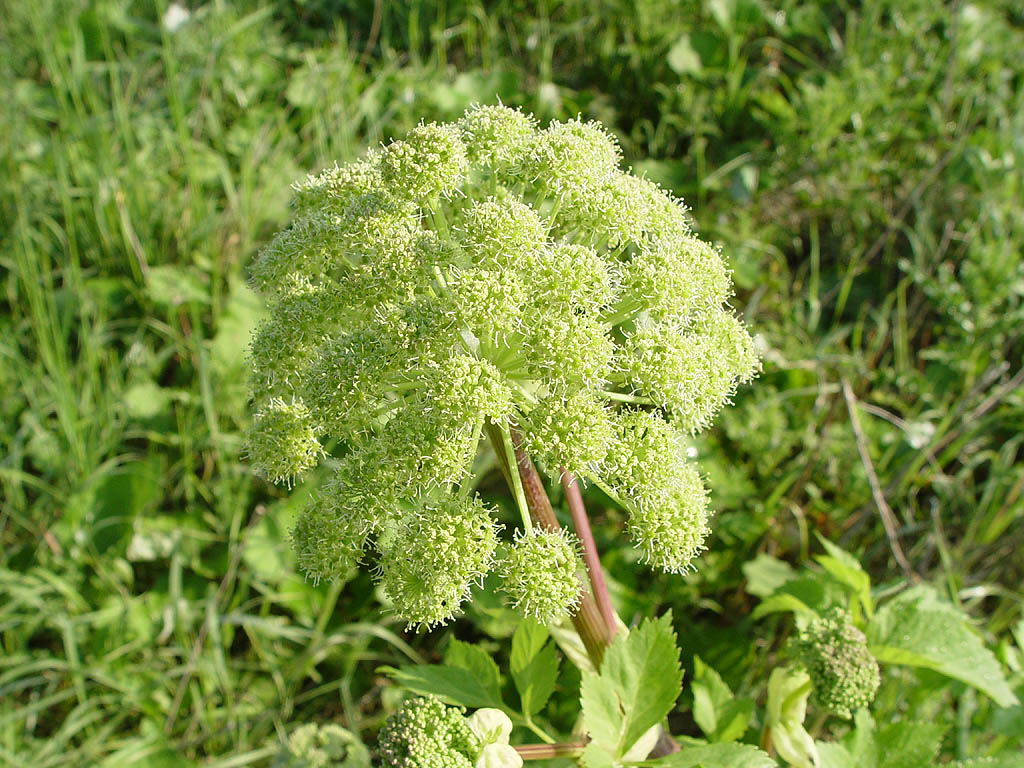 There is a hero in the Umbrella family – angelica, which reaches two meters in height, a branched plant with large inflorescences, umbrellas of greenish or white flowers, smelling of honey. Like his sister – carrots, he has long been valued by man.

According to one legend, this plant was given to people by angels to stop the spread of the plague. According to another legend, the giant hero, defeated by the enemy, turned into angelica. Northern Eurasia is considered the birthplace of angelica officinalis, or, as it is also called, angelica, stem, sweet trunk. It grows in moist places. On dry soils, it may not bloom for years. It is widely used by many peoples as a medicinal and spicy aromatic plant.

With respect to angelica officinalis Russian and Ukrainian traditional medicine. It is recommended for colds, to improve digestion, as a tonic, tonic, choleretic, diuretic, antispasmodic.

At home, you can prepare for external use tincture of angelica roots. To do this, insist the roots on 70% alcohol in a ratio of 1:10. With this tincture, rub joints, lower back, muscles for pain. For toothache, a cotton swab dipped in tincture is placed on the gum or tooth.

In Asian countries they use angelica downs, fluffy, Daurian, Korean. It is believed that angelica creeping down has high antibacterial properties and therefore is used for abscesses, tuberculosis, dysentery, sinusitis and many other diseases.

In European scientific medicine, angelica officinalis is part of medical fees for children with colds. Rhizome is used as a restorative and tonic.

The rhizome of this plant is brown, radish, thick – up to eight centimeters in diameter, contains a yellowish or white milky juice. Since ancient times, it has been called the root of the Holy Spirit. From it, angelic oil is obtained, which has a burning-spicy taste and nutmeg aroma. Fatty oil from the roots has high phototoxicity – it discolors the skin under the influence of sunlight, so it should not be applied to exposed areas of the skin.

For a long time, women used a decoction of the roots of an angelic plant to rinse their hair in order to get rid of dandruff and give them splendor and aroma. In the Middle Ages, the root was used to remove poison from the body with snake bites. He was also part of the medicine of teria, which was considered universal.

Essential oil with a delicate and delicate smell is obtained from angelica seeds. The oil is extracted by distillation; fresh, it is colorless, and acquires a yellow-brown color over time. It is used for aromatization of alcoholic beverages and in the perfume industry.

Angelica officinalis is an excellent honey plant. Angelica honey – fragrant, has a reddish-brown color, is considered to be elite. This honey is traditional for the northern regions of Russia. Useful for cardiovascular diseases, in particular, for myocardial dystrophy and ischemia. It is also a good antispasmodic, improves digestion and boosts immunity.

Angelica is also used in cooking. In French cuisine, buds prepared using special technology are considered an aristocratic dish. We use angelica as a seasoning for borsch and filling for pies.

When collecting angelica yourself, you should be careful: some of its species are similar to a very poisonous plant of the Umbrella family – a milestone poisonous, or tsikutu, which also prefers to grow in moist places.